Less than 10 years ago former US vice president Al Gore was accused of exaggerating and even lying when he warned against the dangers of climate change in his famous documentary 'An Inconvenient Truth'. Last weekend, the vast majority of global leaders finally admitted that global warming is a reality and signed a voluntary agreement promising to reduce greenhouse gas emissions, which are the main cause of climate change. However, the agreement arrives late and falls short because it lacks of mechanisms to ensure that countries will actually keep their promises.

The main objective of the agreement is to prevent the temperature from rising more than 2ºC in comparison to the years before the Industrial Revolution. Scientists claim that if the temperature rises more than that, the consequences of global warming will be irreversible (i.e. toxic levels of carbon in the atmosphere, sea-level rises and the extinction of some species). The problem is that in 2015 we already have temperatures that are 1ºC above those of the pre-Industrial era. Thus, time is running low and the margin for the temperature to increase is small.

Before the Industrial Revolution most things were made using tools or human-powered machines. But from 1760 onwards, people started burning coal to heat large amounts of water and create steam that would power big machines. Even though many technological improvements occurred since then, most energy is still generated by burning coal, gas or oil. This activity produces greenhouse gas emissions, which remains in the atmosphere preventing solar radiation from going out to space and causing global warming.

That is why the countries that signed the agreement of last weekend promised to reduce greenhouse gas emissions. But what they signed was a non-binding agreement, a type of document that doesn´t guarantee that its signers will keep their promises. When a country signs a non-binding agreement is like when a person drives a Lamborghini through a motorway knowing that there are no speed radars around. Without risking a fine, most people will fall into the temptation of pushing the accelerator without considering the damage they may cause to others.

The logic of economics dictates that an activity is profitable (and hence, worth doing) whenever you get more money out of doing something than what it costs you to do it. Most countries only take into consideration the money costs of greenhouse gas emissions, and they forget about the environmental costs. Hence, most countries will only cut greenhouse gas emissions if it's more expensive. Simple ways to achieve this could be to impose fines or taxes, two mechanisms that the agreement signed last Saturday lacks.

Another big problem with the agreement of last Saturday is the way in which the responsibilities of climate change should be distributed. Rich countries developed their economies by relying on fossil fuels for centuries. In doing so, they became responsible for a great part of the current global warming. Many developing countries, like for example India, feel that it is not fair for them to quit using fossil fuels without receiving a compensation. One possible solution is for rich countries to provide developing countries with technologies and finance to produce clean energy. Even though the agreement promises to do this, again, it lacks of any mechanisms to ensure that countries will actually keep their promises. 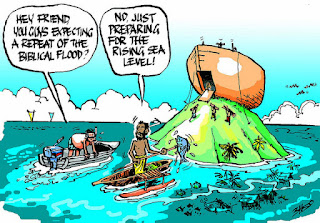